What is Power Apps and how does it work? Microsoft Power Apps is popular for creating apps for different devices like tablet, desktop or mobile. By using Power Apps, we can build custom apps by connecting to various data sources like Microsoft Dataverse, Microsoft Dynamics, SQL Server, OneDrive for Business, SharePoint, etc.

Moreover, PowerApps is widely used for customizing SharePoint Online list forms. Power Apps has become popular among citizen developers and Power Platform developers. Let’s take a look at some of the advantages and disadvantages of using Power Apps and see if there is a better alternative.

Let us check out a few advantages of Power Apps.

What is Microsoft PowerApps limited to and what are its shortcomings?
When implementing dynamic forms for SharePoint, there are some disadvantages when using Power Apps.

But what if you are a non-technical SharePoint user? What if you have no development knowledge, tools, formulas?

Can We Do Without Using Power Apps?

Let’s look at a few business requirements and see how we can achieve them by using Power Apps’ capabilities vs using KWizCom Forms app without writing a single line of code.

What is Power Apps like compared to KWizCom Forms when it comes to displaying columns? To dynamically show or hide columns in the form based on various conditions, we will require to write a few lines of code in Power Apps. For example, to show or hide a few columns based on the Check List Type column in a Hotel site visit checklist, we must write the below formula in the Visible property of each data card:

As a non-technical SharePoint user, it will be impossible to write, debug and test the application.

By using the KWizCom Forms app, we can easily achieve this by configuring logic rules. We can just select which column we want to hide or disable, in which SharePoint list forms (New/Edit/View), and then we can add the condition, such as:

What is Power Apps like with hiding columns? For some business requirements, we may need to hide a field(s) from the list view. We cannot implement this by using Power Apps, since Power Apps hands only forms, not SharePoint list views.

However, we can achieve the same thing with a few clicks by using the KWizCom Forms app. We can see in the below image, I selected the column, applied a rule to hide the column in list views if the current user is not Bijay. According to the logic, if the logged in user is not Bijay, the Contact Number column will not be visible in the list views. The column will appear only for Bijay.

In a modern SharePoint Online list, there is an option to edit in Grid View to bulk update items. We can show/hide/disable columns in Edit in Gridview by using KWizCom Forms. This is not possible to accomplish with Power Apps.

Cascading lookups is a common requirement for any business scenario. Here is an example of a cascading dropdown using KWizCom Forms app. 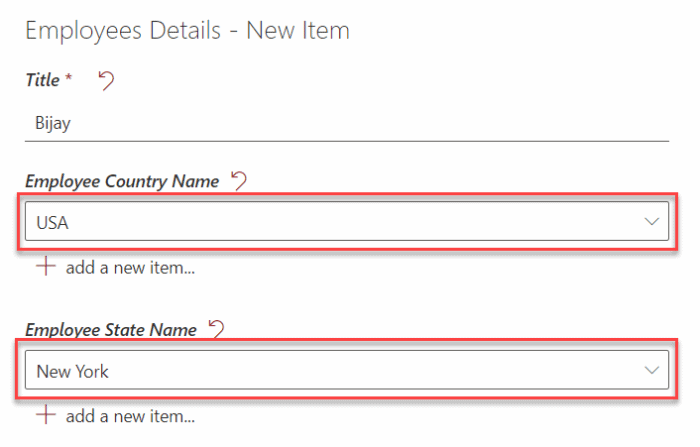 What is Power Apps’ user experience in such a case? To implement cascading lookup using Power Apps, we need to add a few lines of code like it is shown below:

With KWizCom Forms this can be done by using a few clicks and a few configurations without writing a single line of code. Here’s how you configure the “Employee State Name” lookup to be filtered by the “Employee Country Name” field: 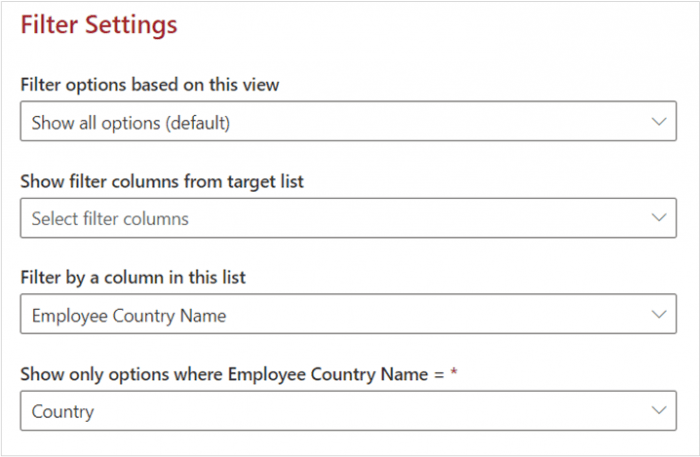 While in MS PowerApps you separately design your forms for different target devices such as Tablet or Desktop, using KWizCom Forms you design once for all target devices. This is because KWizCom Forms uses Microsoft Fluent UI which results in a True, fully-responsive UI.

Furthermore, below are a few more use-cases, that we can easily implement with the KWizCom Forms app without any coding, while in Power Apps additional coding/formulas are required.

KWizCom Forms App is truly a tool that a non-technical user can utilize to customize complex list forms in SharePoint / SharePoint Online. With a few clicks and configurations, we can create dynamic forms without having to use a single line of code or formula. In addition, there are some functionalities that are not possible to achieve with Power Apps. Luckily, we can easily implement these with KWizCom Forms.

If you are a non-technical user and want to customize SharePoint Online list forms for all your business requirements, then you should try the KWizCom Forms app.